In this article I am writing of my own experiences of being an autistic parent of an autistic child.

I have five daughters, one of whom is autistic, one awaiting assessment and three who, like my wife, are very much neurotypical.

I’m often asked if it’s ever difficult being autistic but having neurotypical children. Whilst it’s true that like many autistic people I sometimes find neurotypicals a little hard to fathom, I do still have that unique parental ability to instinctively understand my children.

Like most other parents I can tell when they are upset and even when they’re being typical children and trying to hide something. I certainly don’t have the difficulties understanding subtle body language in the way that I might with other people.

There is also the myth that autistic people lack empathy. Complete nonsense, of course, and in fact it is now known that we can often have an overabundance of empathy. What some of us sometimes struggle with is cognitive empathy. It is certainly true that I occasionally struggle to recognise emotions in some people but certainly not with my own children. That parental bond, whether autistic or not, is a unique and wonderful thing.

Like an increasing number these days, I was diagnosed autistic as an adult. I didn’t receive my diagnosis until I was 45. This was after our family was already complete. I’d therefore been a parent for a very long time before I discovered I was autistic.

If you were to ask me if being autistic without realising had any effect on my parenting then the short answer would be a definite “no”. However, it is important to keep in mind that these are my experiences only as no two autistic people are the same.

For context, I have no co-morbid learning difficulties but I do have sensory differences, co-morbid stomach problems and the standard struggles with some social etiquette. I guess you could picture me as the typical autistic who often hears “oh, I wouldn’t have known.”

A quick search online will throw up countless stories of adults receiving a diagnosis after their children, having recognised their own struggles or differences through their child. For me the story was completely the opposite. Before I’d started realising I was autistic and began researching it, a few years before my diagnosis, my knowledge about autism was very limited.

Deciding on pursuing a diagnosis for my 9-year old daughter

It was only through my own researching and subsequent diagnosis that I began to realise that one of our children was also likely autistic. I’ve been married for 30 years so I was only a teenager when my wife first met me. It was her who was convinced first that our daughter was autistic as she could see so much of me in her. I had my suspicions, but I wanted to be 100% certain before I would agree to having her assessed.

Like me, she would often stim when anxious and she really didn’t cope well with sudden changes. Even attempting to rearrange the furniture in her bedroom would leave her distraught until we returned everything to exactly how it was. 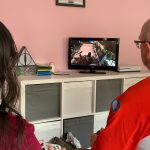 I remember a particular parents evening at her school where her teacher was a little puzzled that on a certain day each week she would become very anxious and withdrawn. We soon discovered that on that day each week her teacher would move the tables and chairs for a lesson. After our discussion, the teacher made a point each week of talking to our daughter before that lesson, explaining that she would be moving things for an hour but replacing them immediately after. That one conversation changed everything and her teacher never had any further problems.

Then there were the numerous incidents of her taking things very literally, far more than I ever have. I do admit that some of them I found amusing. She also struggled at times with sensitivity to sound and also with misinterpreting her friends’ intentions.

There has also been that one thing that parents always find difficult – having to watch her being left out when her peers are going to each other’s birthday parties and sleepovers. I remind myself that she is like I was at her age – mostly oblivious and very happy with her own company. It still doesn’t make it any less upsetting to see as a parent.

Autism diagnosis for my daughter

Once we finally decided to ask for our daughter to be assessed it was via the usual route of CAMHS and like everybody else, that meant a considerable wait. We were fortunate in that because I’m autistic myself, we weren’t concerned in any way. We simply wanted the confirmation and to make it official so that she could access support in the future if it were ever needed.

Of course, I completely understand why non-autistics find it a worrying time, but I would say to them try not to worry. Myself and thousands of other autistic adults are here to tell you it’s really not as bad as you fear.

The biggest struggles your child may face are not necessarily going to be because they are autistic but more how non-autistic people see and treat them. Not all, but certainly many of us wouldn’t change who we are. If I could wave a wand and change being autistic, would I? Certainly not, the only thing I would change would be some of the co-morbitities that I struggle with, particularly the gastro problems. But these aren’t because I’m autistic, they’re just more common amongst us.

I won’t go into all the details of the assessment process, but I will say that it was a long, difficult journey to be listened to and taken 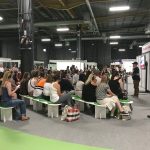 seriously. I heard so many false facts that it was disturbing. It was only really when I revealed that I was an autism consultant and autistic myself that I was taken seriously. To cut a very long story short, we were correct all along and our daughter received a diagnosis of Asperger’s.

There was virtually nothing offered in the way of support following diagnosis. For us this was fine but only because I’m autistic and there was little a non-autistic person could tell me that I didn’t already know or even teach to others. It’s one thing learning about autism from textbooks but you’re never truly an expert unless you’re autistic yourself. Even then you’re only really an expert on how you experience being autistic. However, for the non-autistic parents whose child has received a diagnosis with little follow up support, this does concern me.

We were told that she would be assigned a TA that she could turn to when needed. Nothing was ever done to help her until we eventually had to make a complaint. Only then did things change. At her first parents evening even her form tutor hadn’t been told that she was autistic. Once we informed her, she realised that it made a lot of sense regarding things she’d noticed. Thankfully things then settled down more and she is now much happier in her school. She loved primary school, so the transition was always going to be our biggest concern.

Our autistic daughter is the second youngest of five siblings, ranging in age from 6 to 27. Her sisters treat her no differently which is great, although her sister who is at the same school is very protective of her. They are aware that she experiences the world differently and occasionally they do need to be reminded of this. 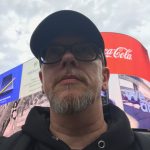 I do get asked what it’s like being an autistic parent and my answer is simple. It’s no different to being a parent when you’re not autistic. For me it really is that simple.

My children are my world and we are a very close family. My wife is very much neurotypical and our partnership just seems to work. I’m acutely aware that I’m very fortunate as this is not the case for many autistic people. But nor is it for the rest of the population either.

My diagnosis gave me answers and explanations. It didn’t change who I am. If I say so myself, I was a good father before diagnosis and I’m a good one now. Our children are happy and successful. Our adult children have now left home and have partners and successful careers. That’s all we hope for.

So, if you’re reading this hoping to read how difficult it is to be autistic and a parent then I’m afraid I’m not the autistic person for you. If anything, being autistic is an advantage for me as a parent. I instinctively know when our autistic daughter is struggling because I have the same struggles. I’m also in a better position to know how to help her. But having non-autistic children has helped me too. It’s helped me learn how neurotypicals experience the world. We all need to learn from each other.

‘Autistic parent of an autistic daughter’ is written by Ronnie Pinder who is a self-advocate, consultant, trainer and mentor. You can view Ronnie’s profile on the Living Autism website here.