Autism is a condition much misunderstood by police officers and others in the Criminal Justice System. Nigel Archer, a retired police Inspector working for the charity Autism West Midlands, explains the basics of the disorder and how CJS Staff can better deal with people with an ASC (Autism Spectrum Condition).

What the vast majority of the population view as ‘normal life’ is quite the opposite for a growing section of society. People with ASCs can find everyday interactions, frightening, confusing and extremely stressful as seen in this quote from a person with the condition: “To me the outside world is a totally baffling incomprehensible mayhem which terrifies me. It is a meaningless mass of sights and sounds, noises and movement, coming from nowhere, going nowhere”. Another states; “I feel like an alien visiting a world I don’t understand and that doesn’t understand me, everything is unpredictable, random and frightening”.

Autism Spectrum Conditions are lifelong disorders affecting the development of the brain characterised by impairments in social interaction, communication (verbal and non verbal) and imagination. Alongside these impairments people with an ASC often demonstrate repetitive behaviour patterns, narrow, obsessional interests, resistance to change, motor coordination difficulties and unusual sensitivity to their environment. It is not identifiable in their physical appearance and can only be identified by their behaviours. Current figures indicate that 1 in 100 people in the UK have an ASC. Many may not have been diagnosed and it is only when an incident results in their first encounter with the Criminal Justice System that their condition is recognised. Unlike many mental health conditions there is no treatment.

What does this mean for the Criminal Justice System (CJS)?

The prevalence of ASCs was finally recognised by government with the introduction of the Autism Act 2009 and the accompanying strategy which recommends that all staff in the CJS receive training in awareness of ASCs. This is reinforced by the ‘Independent Review of Mental Health in the Criminal Justice System’ by Right Honourable the Lord Bradley and his recommendation of the same. In particular both recognise the need for police officers to be able to identify the behavioural clues that may indicate someone with an ASC in order that appropriate measures can be taken to ensure they are treated as vulnerable persons by the system. Officers first must be aware of the condition, then, learn to apply certain techniques in the initial contact or interview which may increase the probability of appropriate responses and lead to a successful outcome of the encounter.

Why might someone with an ASC encounter the police?

When responding to a call that involves a person with an ASC officers may face a situation that will challenge the training, instincts and professional conduct of even the most experienced. Whilst officers may approach what they perceive to be a ‘run of the mill’ incident in a manner they have developed to ensure their own safety and that of others their mere presence may cause what they perceive as inappropriate response by a person with ASC. A person with an ASC may not understand the implications of their behaviour or the consequences of their actions especially if their actions appear aggressive. They may run, failing to respond to an order to stop or drop to the floor and begin rocking back and forth or avoid eye contact with the officer. Officers should not misinterpret these actions as a reason for increased use of force as an ASC person may escalate into tantrum like behaviour from fear, frustration or confusion. The individual with an ASC cannot conceptualise meanness or acts of purposeful injury to others. They just want the circumstances to change and become less frightening but may not have the ability to formulate a way to implement such a change.

In order to deal with someone with ASC effectively either at the initial encounter or later in an interview situation it is essential that officers have had some basic awareness training which incorporates some useful guidance in the form of what to do and what not to do. Such training is available in some parts of the country. For instance the charity based in Birmingham for which I work offers sessions designed specifically for police and other CJS professionals to meet the needs of operational staff in their various roles. Forces such as West Mercia and Warwickshire Police are already seeing positive benefits from receiving this training as are Probation Officers and Youth Offending Services who have also taken it. It is leading to fewer ‘unnecessary arrests’ and provision of services which cater for the ASC individual such as adaptations to working practices.

It would be impossible to cover everything in the training sessions in this article but here are some key points provided, together with some of the more obvious behaviours, on a double sided laminated pocket note book size card at the conclusion of the training sessions for police to assist them in their initial response at incidents.

Indicators that an individual may have an Autism Spectrum Condition

They may avoid eye contact even if you move to be in their line of sight.

They may be nonverbal (50% of autistic persons do not speak) or may have limited vocabulary.

They may speak in monotone without expected inflections.

They may repeat exactly what you say.

They may engage in repetitive physical actions, such as hand flapping, finger flicking or twirling an object in their hands.

They may rock back and forth, pace or engage in self-abuse (temper tantrums are an expected response to fear, confusion, anxiety or frustration as an effort to stop whatever has stimulated it).

They may have an awkward gait or running style.

They may not immediately respond to verbal commands or sounds.

They may not understand your body language or recognize your commanding presence or uniform.

They may be dressed inappropriately for the weather (they will have preferred items even if not suited to the season).

They may not ask for help or show indications of pain even if an injury is apparent.

They may carry an ‘Attention’ or ‘Alert’ card issued by an Autism Charity with details about their condition (see the below example).

Approach the person in a quiet non-threatening manner.

Understand that touching may cause a protective ‘fight or flight’ reaction.

Talk in a moderate calm voice.

Instructions should be simple & direct with no use of slang.

Seek all clues as to the cause of the situation and see if the person is carrying an ‘Attention’ or ‘Alert’ card.

Maintain a safe distance until any inappropriate behaviour lessens.

What if a crime has been committed?

If officers take a person into custody and even remotely suspect ASC, to reduce the risk they must be treated as vulnerable in line with the requirements of PACE 1984 and will require constant watch during their stay. Advance notice to the Custody Unit to ensure the desk and entrance area is clear of all other persons on arrival would be advisable to keep the person calm. A doctor should always be called and the suspicion of ASC made clear to them. An appropriate adult who knows them and understands their behaviours should be sought immediately in order to help reduce their anxiety and assist officers with their processes.

Officers should prepare themselves for the fact that they will not be able to conduct ‘normal’ Tier 1 or 2 interviews, but may require a skilled vulnerable person trained interviewer to have any hope of achieving any progress. In fact proving ‘Mens Rea’ (the guilty mind) in most cases would be extremely difficult as it just is not there. People with an ASC may lack the skills to imagine the potential outcome and consequences of their actions. That is not to say they cannot commit crime, they just may not realise what they have done is wrong. For example; we need only look at the Gary McKinnon case, where his obsession for seeking evidence of aliens led to his hacking into government computer systems. He is a prime example of the higher functioning members of the ASC community who have remained undiagnosed until an incident results in their first encounter with the Criminal Justice System.

Police Officers and other members of the Criminal Justice Sector cannot be expected to be ‘subject experts’ in every disability they may encounter, but given the nature of autism, their chances of encountering someone with an ASC is significant and has the potential to pose real problems for them. It is for this reason that the recommendations have been made by the government that specific training be provided to staff to assist them in identifying the condition and therefore be able to provide an appropriate response. Whilst the financial constraints being faced by forces may seem to make the cost (though small) of such training unlikely, the resultant savings in terms of reduction in wasted officer time and potential for diversion of ASC individuals to other more appropriate agencies preventing repeat incidents would seem to offset this over the longer term. Personally I believe that a short term investment which sees a better service to a considerable proportion of the community is one worth making.

Further information and advice including specific advice documents (Pdf format for downloading / printing) for police and other professionals and parents are available on the following website under Help and Advice / Criminal Justice or Downloads: www.autismwestmidlands.org.uk

The above site also has an online application form for our ‘Attention Card’ for people with an ASD who do not require 24/7 care who may find themselves in difficult situations. It has been specifically designed to incorporate key ‘trigger’ words which will make officers consider altering their approach and communication style. This is the card: 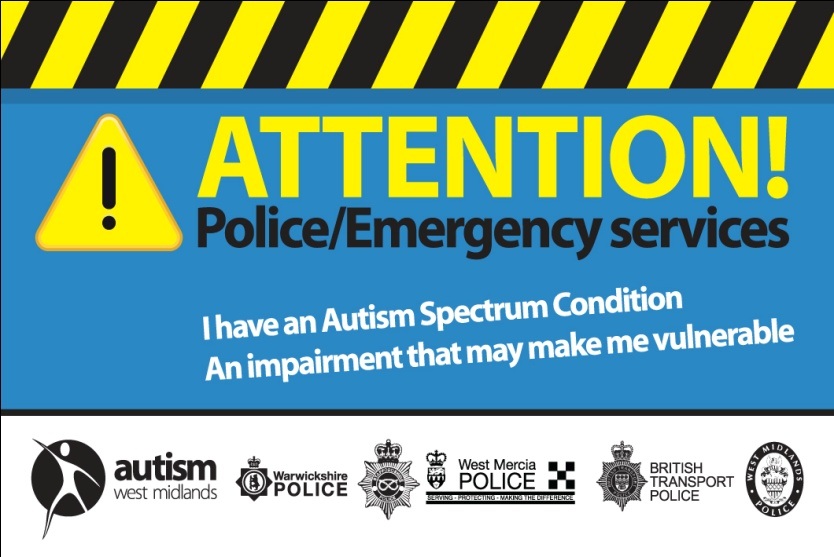 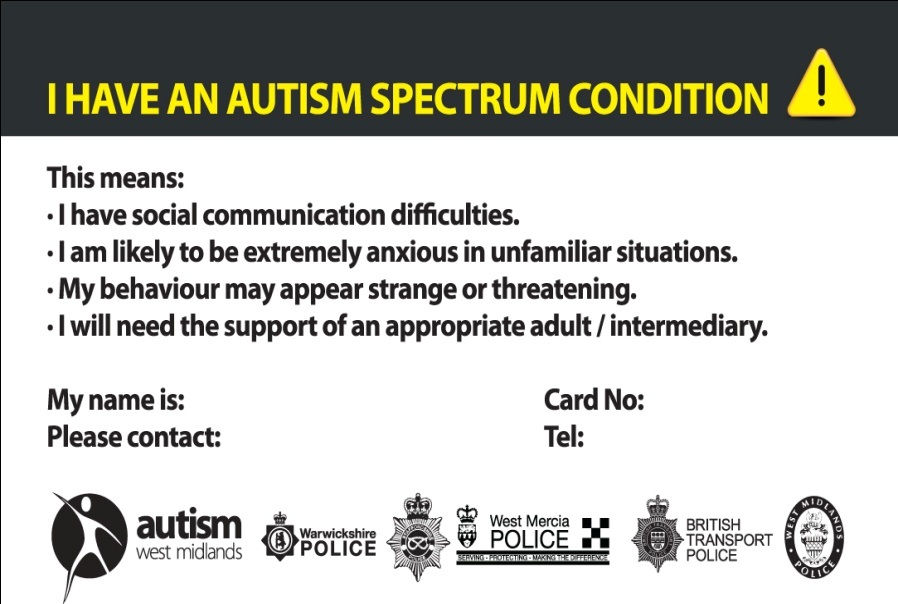